The Eccles-Larmor theory is now regarded as the basic theory of radio wave propagation in the ionosphere. Magneto-Ionic theory

The Eccles-Larmor theory is now regarded as the basic theory of radio wave propagation in the ionosphere and has been supplemented by the electrons and ions so called Magneto-Ionic theory developed by Appleton, Hartree, Goldstein and others.

The presence of charged particles (i.e. electrons and ions) of ionosphere affect the path of the radio waves. The theory was given by Eccles and Larmor by assuming that there is no effect of earth's magnetic field and the collisions between electrons and gas atoms.

The theory of propagation of electromagnetic waves through an ionized medium in the presence of external magnetic field is known as Magneto-Ionic theory. When the radio waves paas through the ionosphere, the earth's magnetic field exerts a force on the moving electrons. This force is proportional to the instantaneous velocity of the electron and to the component of magnetic field at right angles to the direction of motion.

The direction of this force is right angles to both the direction of motion of electron and component of magnetic field. The path of the electron is thus altered. It is elliptical at higher radio frequency. 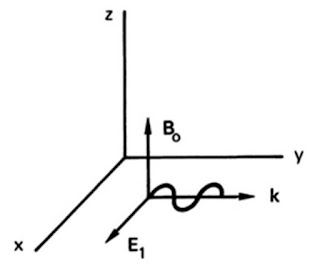 As the frequency is reduced, ratio of minor axis to the major axis increase until at frequency 1.4 milli cycle/sec (mc/s), called gyromagnetic frequency electron vibrates in spiral. Due to large inertia the ions do not vibrate with the field, but the electrons are found to execute oscillatory motion at the wave frequency.

Consider a plane electromagnetic wave traveling in the positive direction of x-axis with E and B vector parallel to y and z-axis respectively. An ion of charge q, mass m and velocity v is subjected to a force F given by