In this chapter, we will study regarding displacement current, electromagnetic waves and its various parts and their uses. Electromagnetic waves in the form of visible light enable us to view the world around us. Infrared waves warm our environment. Radio waves carry our favourite TV and radio programs and the list goes on and on.

This equation is considered Gauss’s law in magnetism. It states that the net magnetic flux passing through a closed surface is zero.

This equation is Faraday’s law of electromagnetic induction. This law relates the electric field with changing magnetic flux.

This equation represents Ampere-Maxwell’s law or a generalized form of Ampere's law. 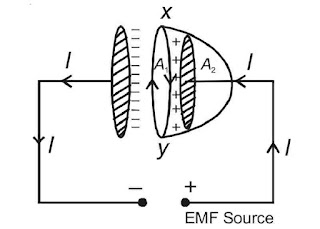 This current Id passes through the surface A and is known as Maxwell displacement current.

(i). Sources of electromagnetic waves 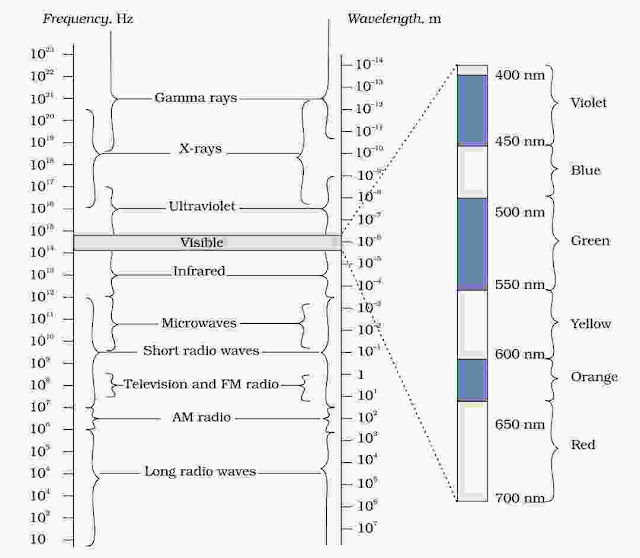 There is no sharp division between one kind of wave and the next. The classification is based roughly on how the waves are produced and/or detected.

Radio waves are produced by the accelerated motion of charges in conducting wires. They are used in radio and television communication systems. They are generally in the frequency range from 500 kHz to about 1000 MHz. Cellular phones use radio waves to transmit voice communication in the ultrahigh-frequency (UHF) band.

Microwaves, with frequencies in the gigahertz (GHz) range, are produced by special vacuum tubes (called klystrons, magnetrons, and Gunn diodes). Due to their short wavelengths, they are suitable for the radar systems used in aircraft navigation. Radar also provides the basis for the speed guns used to time fastballs, tennis serves, and automobiles. Microwave ovens are an interesting domestic application of these waves.

Infrared waves are produced by hot bodies and molecules. This band lies adjacent to the low-frequency or long-wavelength end of the visible spectrum. Infrared waves are sometimes referred to as heat waves. This is because water molecules present in most materials readily absorb infrared waves.

Infrared lamps are used in physical therapy. Infrared radiation also plays an important role in maintaining the earth’s warmth or average temperature through the greenhouse effect. Infrared detectors are used in Earth satellites, both for military purposes and to observe the growth of crops.

The greenhouse effect is a natural process that warms the Earth’s surface. When the Sun’s energy reaches the Earth’s atmosphere, some of it is reflected back to space and the rest is absorbed and re-radiated by greenhouse gases. Greenhouse gases include water vapor, carbon dioxide, methane, nitrous oxide, ozone, and some artificial chemicals such as chlorofluorocarbons (CFCs). 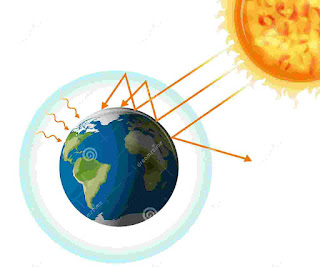 The absorbed energy warms the atmosphere and the surface of the Earth. This process maintains the Earth’s temperature at around 33 degrees Celsius warmer than it would otherwise be, allowing life on Earth to exist.

It is the part of the spectrum that is detected by the human eye. It runs from about 4 × 1014 Hz to about 7 × 1014 Hz or a wavelength range of about 700 – 400 nm. Visible light emitted or reflected from objects around us provides us information about the world.

Ultraviolet (UV) radiation is produced by special lamps and very hot bodies. The sun is an important source of ultraviolet light. But fortunately, most of it is absorbed in the ozone layer in the atmosphere at an altitude of about 40 – 50 km. UV light in large quantities has harmful effects on humans.

Welders wear special glass goggles or face masks with glass windows to protect their eyes from the large amount of UV produced by welding arcs. Due to its shorter wavelengths, UV radiations can be focussed into very narrow beams for high-precision applications such as LASIK (Laser-assisted in situ keratomileusis) eye surgery. UV lamps are used to kill germs in water purifiers.

Its frequency order is 1016 Hz to 1021 Hz. Its wavelength lies between 10 nm to 10-4 nm. It is produced in a tube called a modern X-ray tube. It is detected by photographic film, Geiger tubes and an ionization chamber.

They lie in the upper-frequency range of the electromagnetic spectrum and have wavelengths from about 10-10 m to less than 10-14 m. This high-frequency radiation is produced in nuclear reactions and is also emitted by radioactive nuclei. They are used in medicine to destroy cancer cells.