In this chapter, we shall discuss the type of propagation of waves through different media, and the factors affecting the speed of waves in them. We will also discuss the superposition of waves and Doppler’s effect in sound.

Most of us experience the phenomenon of wave propagation when we drop a stone in a pond of still water. These waves move outwards in expanding circles until they reach the shore. It seems as if the water is moving outward from the point of disturbance.

Transverse waves are the waves in which the constituents of the medium oscillate perpendicular to the direction of wave propagation.

If we give an upward jerk to one end of a long rope that has its opposite end fixed, a single wave pulse is formed and travels along the rope with a fixed speed. 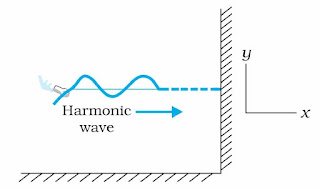 Longitudinal waves are the waves in which the constituents of the medium oscillate along the direction of wave propagation.

Displacement Relation in a Progressive Wave

A traveling wave is also referred as a progressive wave. It may be transverse or longitudinal. We consider a transverse wave so that if it travels along positive x-axis, the constituent particles of the medium vibrate along y-axis, about their mean positions. In general, sinusoidal shape can be described by sine function or cosine function.

At time t, the displacement y of the element located at position x is given by

where y(x, t) → Displacement of the medium particles from their mean positions

a → Amplitude of a wave

ω → Angular frequency of the wave

The maximum displacement of the constituents of the medium from their equilibrium position is called amplitude of the wave.

Phase of a wave is the argument of the sine function. Phase determines the displacement of the wave at any position and at any instant.

It is the point of maximum positive displacement on a wave. The peak of a sinusoidal wave represents a crest.

It is the point of maximum negative displacement on a wave.

Time period of oscillation of the wave is the time it takes for an element of the medium to complete one full oscillation.

Wavelength is the minimum distance between two points having the same phase at a given time. It is usually denoted by λ.

Where k is the angular wave number or propagation constant.

The frequency 'ν' of the wave is the number of oscillations per second. It is denoted by the symbol ‘ν’. The SI unit of frequency is hertz (Hz). 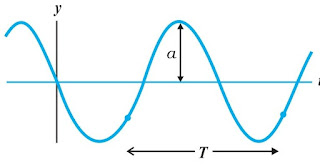 The Speed of a Traveling Wave

If we focus on a particular point on the wave and observe the motion of this point in time, we can determine the speed of a traveling wave.

Here in the figure we have two snapshots of a single traveling wave taken in a small interval Δt. The entire wave moves through a distance Δx in interval Δt. The wave speed can be calculated using the relation v = Δx/Δt.

Let us consider a crest shown by point A in the figure. As the time changes, the position of the crest changes from A to B. Since the phase remains constant

Hence, the speed of the wave is

(i). Speed of a transverse wave on stretched string

The speed of a mechanical wave depends on the inertial and elastic properties of the medium. It is inversely related to the inertial property and directly to the elastic property of medium. In case of a stretched string inertial property is its linear mass density (μ). Further, we cannot send a wave along a string unless the string is under a tension. Therefore, we can associate the tension with the elasticity of the string.

Speed of transverse waves on a stretched string is given by

(ii). Speed of a longitudinal wave

In case of a linear medium like a solid rod the relevant modulus of elasticity is Young’s modulus (Y). Therefore, in case of solids, velocity of longitudinal wave is given by

Note: The speed of sound is greater in solids and liquids than in gases even though they are denser than gases. This happens because they are much more difficult to compress than gases and so have much higher values of bulk modulus.

(iii). Speed of sound in gases

The speed of longitudinal waves in an ideal gas is

This relation is known as Newton’s formula.

The speed of sound in a gas is

The Principle of Superposition of Waves

Thus we can say that each pulse moves as if others are not present. The net displacement of the constituents of the medium is an algebraic sum of the two interfering pulses. This is called the principle of superposition of waves.

Reflection and Transmission of Waves

When a progressive wave, like a transverse wave travelling along a stretched string arrives at a rigid boundary, the wave gets reflected. The reflected wave suffers a phase change of 180° on reflection. At the rigid boundary, disturbance must have zero displacement all the time. By the principle of superposition, this could be possible only when the two waves (the incident and the reflected waves) have a phase difference of 180° or π radian. 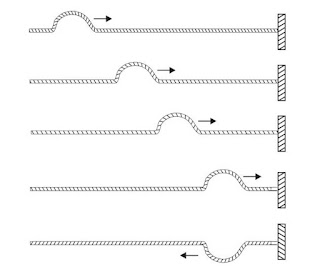 The phenomenon of echo is an example of reflection of sound by a rigid boundary.

When a travelling wave in one direction will get reflected at one end, which in turn will travel and get reflected from the other end. This will go on until there is a steady wave pattern set up on the string. Such wave patterns are called standing waves or stationary waves.

When two harmonic sound waves of equal amplitude but slightly different frequencies superpose, the resultant wave looks like a single sinusoidal wave with a varying amplitude that goes from maximum to zero and back. The amplitude variation causes the variation of intensity called beats. The frequency with which the amplitude rises and falls is called the beat frequency and is equal to the difference in frequencies of the two waves. The rise and fall of the intensity of sound is called waxing and waning.

Doppler effect can be observed when

Let us consider a source of sound producing a wave of angular frequency ω, velocity v and time period T0, moving with velocity vs. As a convention we have taken the direction from the observer to the source as positive.

For a source approaching the observer

Let us consider a source of sound producing a wave of angular frequency ω, velocity v and time period T0, to be at rest. While an observer initially at O1 is moving with velocity vs towards the source.

If the observer moves away from the source,

(iii). Both Source and Observer Moving

Let us consider that both the source and observer are moving with velocity vs and v0 respectively. The source emits a wave of angular frequency ω, velocity v and time period T0.

The observed frequency is given by