Q. 1. What characteristics should a medium possess for propagation of a wave through it? Ans. A medium should possess the properties of elasticity and

Science is a complex and challenging subject, as it involves so many principles and concepts that are difficult to memorize. Those student who opt for science have to face many challenges and work hard to get good marks in the exam. In this lesson, students will learn about chapter 15 Waves. The best solution of the problem is to practice as many Important Questions of 'Physics Class 11 Chapter 15' as possible to clear the doubts. 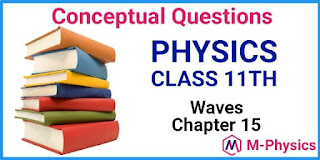 Q. 1. What characteristics should a medium possess for propagation of a wave through it?
Ans. A medium should possess the properties of elasticity and inertia so that a wave may be propagated through it.

(b) For a longitudinal wave, the medium particle must vibrate along same line as the direction of propagation of wave.

Q. 3. What is the nature of sound waves?
Ans. Sound waves are longitudinal waves propagating through air whose frequencies lie within the audible range (i.e., from 20 Hz to 20 kHz).

(b) In vacuum, mechanical waves cannot be set up at all.

(c) Inside the water, only longitudinal waves can be set up.

(d) On the surface of water, water ripples are set up which are almost transverse waves, set up under the action of surface tension of water.

Q. 5. Is an oscillation a wave? Give reason too.
Ans. No, an oscillation is not a wave. A wave is formed when along with oscillations of individual particles of a medium, there is a continuous propagation of disturbance from one particle of medium to another and so on.

Q. 8. Why is flash of lightning seen before one hears the sound of a thunder?
Ans. It is because speed of light is extraordinarily large (3 x 108 m/s) in free space and air but speed of sound in air is only about 343 m/s at a room temperature of 20°C.

(b) Speed of sound waves depends on nature of medium and is generally small (only 331 m s through air under STP conditions) but speed of radio waves is exceedingly large (3 x 108 m s in vacuum or air).

(a) air and other gases are very poor thermal conductors, and

(b) compressions and rarefactions occur in quick succession. Therefore, heat exchanges are not possible and the process is adiabatic.

(b) Speed of sound in air does not depend on the wavelength of sound waves.

(c) Ordinarily, speed of sound does not depend on amplitude of wave provided that it is not exceptionally high (as in a high power explosion).

(d) Speed of sound is independent of intensity of sound provided that intensity is not exceptionally high.

where λ = wavelength of the given wave.

Q. 16. A harmonic wave is expressed as y(x, t) = A sin (ωt - kx). How do you obtain its wave velocity?
Ans. The wave velocity of the given wave v = `\frac{dx}{dt}` = rate at which the wave propagates along positive direction of x. It can be easily shown that magnitude of wave velocity v = ω/k.

Q. 18. What is the phenomenon of interference of waves?
Ans. Interference is phenomenon of redistribution of energy and formation of alternate regions of maximum and minimum amplitudes (and hence energy) when two waves of equal frequencies, equal or nearly equal amplitude and travelling along a given direction superpose on each other.

Q. 19. Why is a standing wave called so?
Ans. In a standing wave, the medium particles vibrate to and fro about their respective mean positions but the disturbance does not travel forward from one part of medium to another. That is why, the wave is called a standing wave.

Q. 20. Is superposition principle valid only for transverse waves formed on a string or true for other waves too?
Ans. The principle of superposition of waves is true for all sort of waves whether mechanical waves or electromagnetic waves.

Q. 24. What do you mean by the term 'overtones'?
Ans. Whenever, a string clamped at its ends or an organ pipe vibrates, it can vibrate in number of normal modes of vibration. In such a situation, the note of the smallest frequency is called the fundamental note. Notes of higher frequencies which are integer multiple of fundamental frequency are called the overtones.

Q. 25. Two sound waves superimpose in such a way that the resultant sound intensity falls from maximum sound to a faint sound in 1/10 s and again rises to maximum (a loud) sound in 1/5 s. What is the frequency of beats?
Ans. In this question, time of formation of one beat, i.e., time interval between two successive maximum sound instants is 1/5 s. Hence, frequency of beats, i.e., the number of beats formed per second is 5 Hz.

Q. 27. Does a vibrating source always produce sound? If not, under what condition is a sound produced?
Ans. When a source vibrates, a sound will be produced only if its vibrational frequency lies between the limits 20 Hz and 20 kHz (i.e., within the audible frequency range).

Q. 32. A person can very well detect a distant coming train by placing his ear near the rails, although train cannot yet be seen by the eye. Explain how.
Ans. If the train is situated at a long distance or railway track is curved one, then a person cannot see the incoming train. However, if the person places his ear near the rails, he can listen the sound of incoming train. It is because speed of sound in steel rails is very high (more than 5 km/s) and due to high elasticity of steel, the waves do not die out easily. Hence, one can detect the incoming train by listening its sound.

Q. 35. Sound travels faster on a hot humid day than on a cold dry day. Explain why.
Ans. We know that speed of sound waves in air increases with increase in temperature (in fact, v ∝ √TK). Moreover, if humidity is higher, it means more water vapour is present in air. As density of water vapour is less than that of dry air, the speed of sound increases with increase in humidity. Thus, it is clear that speed of sound more on a hot humid day as compared to that on a cold dry day.

Q. 36. On what factors does the wave speed in a medium depend? Do longitudinal and transverse waves travel with same speed in a medium?
Ans. We know that for propagation of a wave through a given medium, the medium must possess inertia (or inertial mass) and elasticity. Therefore, elastic properties of the medium and linear mass density in case of a linear system and density for a bulk system determine the speed of wave propagation in that medium.

Q. 40. Why are several holes provided in a flute?
Ans. A flute is an open organ pipe. The length of vibrating air column can be changed by putting fingers on the holes or removing fingers from the holes. By changing length of air column, one can produce notes of different frequencies.

Q. 41. Bats can ascertain distances, directions, nature and size of the obstacles without any "eyes". Explain how.
Ans. Bats emit high frequency longitudinal waves (ultrasonic waves) which travel in all directions: If an obstacle is present somewhere, the wave is reflected from it and the reflected wave is received by the bat. From the reflected wave received, bat can ascertain distance of obstacle by estimating the time of echo.

He estimates the nature and size of the obstacle by knowing the intensity of reflected wave received. The direction of obstacle is estimated by bat by judging the time gap between reflected waves received by his two ears. Bats have their senses perfected to get all these results without the need of actual calculations.

Q. 44. Is Doppler effect applicable for light waves too? Give an example.
Ans. Yes, Doppler effect is applicable for light waves too. Wavelengths of the spectral lines of light emitted by stars are found to shift slightly towards the red end of the spectrum. It means there is an increase in wavelength of light or decrease in observed frequency of light emitted by stars. As per Doppler effect, it is possible only if stars are moving away from us. The phenomenon is called red shift and it supports the expanding universe theory of cosmos.

Q. 45. What would a person hear when he moves away from a stationary sound source with the speed of sound?
Ans. The person will not be able to listen any sound because he is moving away from the source of sound with speed of sound. Thus, relative velocity of sound with respect to the moving observer will be zero and consequently, sound wave will not be able to reach the observer.

Q. 50. Energy in the Sun is generated due to thermonuclear fusion reaction going on at the centre of the Sun. As a result of this reaction, light, heat as well as sound is produced. Light and thermal effects reach the Earth but sound does not reach the Earth. Why?
Ans. Light and thermal radiations are both electromagnetic waves and they can travel through free space so as to reach the Earth. However, sound waves are mechanical waves and they cannot be propagated through free space. Consequently, sound produced at the Sun cannot be detected from the Earth.

Q. 52. "The most fundamental property of a wave motion is its frequency". Comment on the statement.
Ans. The statement is perfectly alright. When a wave passes from one medium to another medium, the wave speed as well as its wavelength change. However, the frequency of the wave remains unchanged. It is due to this reason that we say the frequency to be the most fundamental property of a wave.