Science is a complex and challenging subject, as it involves so many principles and concepts that are difficult to memorize. Those student who opt for science have to face many challenges and work hard to get good marks in the exam. In this lesson, students will learn about Nuclei. The best solution of the problem is to practice as many Physics Class 12 Chapter 13 Important Questions as possible to clear the doubts. 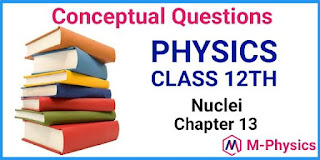 Q 2:- How many electrons, protons and neutrons are there in a nucleus of atomic number 11 and mass number 24?
Ans:- The number of protons in the nucleus = atomic number, Z = 11

Q 3:- What holds nucleons together in a nucleus?
Ans:- Strong attractive force between neighbouring nucleons inside a nucleus holds them together.

Q 6:- Define the term 'activity of a radionuclide. Write the SI unit.
Ans:- The rate of decays (i.e., number of disintegration per unit time) of nuclei in a given radioactive sample is called its 'activity'. Its SI unit is 1 becquerel (1 Bq), where 1 Bq = 1 disintegration/s.

Q 7:- What is the origin of β--particles, the nucleus or the orbiting electrons?
Ans:- β--particles have same charge and same rest mass as the electrons, but their originating place is the nucleus. A β--particle is emitted whenever a neutron is transformed into a proton inside the nucleus.

Q 10:- Write the nuclear reactions for the following:

(c) β+ decay of 6C11
Ans:- The respective nuclear reaction equations are given as:

Q 12:- What are thermal neutrons?
Ans:- Thermal neutrons are small energy neutrons in thermal equilibrium with the surrounding matter at room temperature. These are in motion at a thermal speed of about 2 km/s and possess kinetic energy of about 0.04 eV.

Q 22:- Why is the mass of a nucleus always less than the sum of the masses of its constituents, neutrons and protons?
Ans:- The mass of a nucleus is invariably a bit less than the sum of the masses of its constituent protons and neutrons. It is on account of the fact that some work is to be done on the nucleons to bring and bind them together within the small region of nucleus. The energy needed to do the work is obtained at the cost of mass in accordance with mass-energy equivalence. The difference between the total mass of constituent nucleons and mass of nucleus is called the mass defect. More mass defect means that nucleons are more rigidly bound within the nucleus and more stable the given nucleus is.

Q 23:- Why is the ionising power of a-rays much greater than that of β-rays or γ-rays?
Ans:- Alpha rays consist of heavy particles (He) having high kinetic energy as well as large momentum. As a result, on collision with neutral atoms, they can easily eject one or more valence electrons and cause ionisation.

Q 24:- Why is the penetrating power of gamma rays very large?
Ans:- The gamma rays are electromagnetic waves of extremely short wavelengths. Consequently, the energy of a γ-ray photon is very high. Rest mass of γ-ray photon is zero and it is not deflected either in an electric or a magnetic field and goes unobstructed through a medium. As a result, the penetrating power of gamma rays is very large.

Q 25:- What do you mean by the statement "Radioactivity is a statistical process"?
Ans:- Radioactive decay is a statistical process because we cannot precisely predict the timing of a particular radioactivity exhibited by a particular nucleus. The nucleus may decay immediately or it may last a long long time before decaying. We can only predic the probability of decay.

Q 26:- A radionuclide disintegrates by β-decay. Can you guess, whether it will emit a β-particle or a β+-particle?
Ans:- Whenever N/Z (neutron to proton ratio) ratio in a nucleus is higher than required for stability, a neutron is converted into a proton inside the nucleus leading to beta minus (β-) decay. On the other hand, if N/Z ratio of a nucleus is lower than required for stability, a proton is converted into a neutron inside the nucleus leading to beta plus (β+) decay.

Q 33:- Why does the binding energy per nucleon decrease with increase in mass number for heavy nuclei like 238U?
Ans:- Binding energy per nucleon Ebn decreases with increase in mass number A > 170. So, value of Ebn is less for heavy nuclei like 238U. Such heavier nuclei contain a large size and mass and a large number of protons. These protons exert a strong coulombian repulsive force and as a result, the binding of nucleons becomes less tight and value of Ebn falls.

Q 34:- If the nucleons bound in a nucleus are separated from each other, the sum of their masses is greater than the mass of the nucleus. Where does this mass difference come from? Explain briefly.
Ans:- When we want to divide a composite nucleus into its constituent nucleons, we have to supply energy, equal to the binding energy of the nucleus. In accordance with mass-energy relationship, the supplied energy it transformed into mass. Thus, mass difference comes from conversion of energy into mass.

Q 36:- A free neutron is unstable but a free proton is stable. Why?
Ans:- A free neutron is unstable because it can spontaneously decay into a proton, an electron and an antineutrino. This reaction has a positive Q-value and it takes place easily. However, a proton cannot spontaneously decay into a neutron, positron and neutrino because proton is slightly lighter than a neutron and Q-value of the reaction is negative. Therefore, a free proton is stable.

Q 37:- Neutrons produced in fission can be slowed down even by using ordinary water. Then, why is heavy water used for this purpose?
Ans:- Although fast neutrons produced in nuclear fission can be easily slowed down by using water (H2O) as a moderator but there is a considerable chance that water may absorb a neutron and transform into heavy water. It will mean loss of neutrons. To avoid this possibility, generally, heavy water is used as moderator in a reactor to slow down fast moving neutrons.

Q 38:- If both the number of protons and the number of neutrons are conserved in each nuclear reaction, in what way is mass converted into energy (or vice versa) in a nuclear reaction?
Ans:- In each nuclear reaction, the proton number and neutron number are conserved. So, the total rest mass of neutrons and protons is same on either side of reaction equation. However, binding energy on one side need not be same as on the other side of equation. It is the difference in binding energies which appears as energy released or absorbed in a nuclear reaction. Since binding energy contributes to mass, hence we say that the difference in the total mass of nuclei on the two sides gets converted into energy or vice versa.