Q 1:- What is forbidden energy gap in solids? Ans:- The energy gap (Eg) between the top of valence band and bottom of conduction band of a solid is

Science is a complex and challenging subject, as it involves so many principles and concepts that are difficult to memorize. Those student who opt for science have to face many challenges and work hard to get good marks in the exam. In this lesson, students will learn about Semiconductor Electronics: Materials, Devices and Simple Circuits. The best solution of the problem is to practice as many important question of 'Physics Class 12 Chapter 14' as possible to clear the doubts. 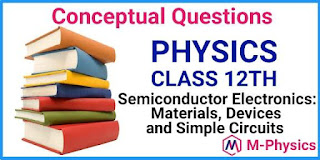 (a) the energy band gap of the given semiconductor solid, and

Q 7:- What is depletion region in a p-n junction?
Ans:- A thin layer on either side of the junction, which is devoid of free charge carriers (electrons and holes) and contains only immobile ions is called the depletion region/layer.

(b) The width of depletion layer of a p-n junction increases when the junction is reverse biased.

Q 9:- Name the diode (a) for which the output voltage is a regulated voltage, and (b) that emits spontaneous radiation when forward biased.
Ans:- (a) Zener diode provides regulated output voltage,

Q 10:- Write the main use of the (a) photodiode, and (b) Zener diode,
Ans:- (a) A photodiode is used for measuring light intensity,

(b) A Zener diode is used as a voltage regulator in DC power supplies.

Q 11:- Name the p-n junction diode that emits spontaneous radiation when forward biased. How do we choose the semiconductor, to be used in these diodes, if the emitted radiation is to be in the visible region?
Ans:- Light emitting diode (LED) emits spontaneous radiation when forward biased. The visible light photons have energies ranging from 1.8 eV (for red photon) to 3.0 eV (for blue photon). Therefore, for radiation to be in the visible region, we choose those semiconductors to fabricate LEDs whose energy band gap (Eg) lies within the limits 1.8 eV and 3.0 eV.

Q 12:- What do you mean by rectification?
Ans:- Rectification is the process of converting AC input voltage into unidirectional DC voltage.

Q 17:- In a transistor, doping level in base is increased slightly. How will it affect (a) collector current, and (b) base current?
Ans:- If the doping level in base region of a tansistor is increased slightly, then greater fraction of charge carriers (electrons or holes) entering into base from the emitter will be neutralised due to recombination of opposite charge carriers in base region. As a result, 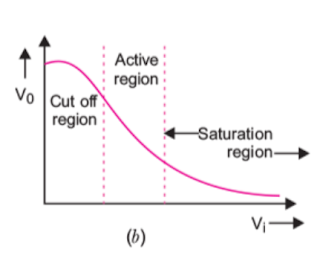 (a) It is a convenient way of describing the actual motion of bound electrons whenever there is an empty bond in the semiconducting crystal.

(b) Conduction, due to the holes, take place when holes are actually present in the valence band of crystal.

(c) Under the action of an external electric field, holes move towards negative potential.

Q 20:- How does the forbidden energy gap (Eg) of an intrinsic semiconductor vary with increase in temperature?
Ans:- The width of forbidden energy band gap Eg of an intrinsic semiconductor does not change at all with increase in temperature. However, at higher temperatures, electrons in valence band may have higher average thermal energy. So, probability of motion of electrons from valence band to conduction band increases and in that sense, one may say that energy gap has been effectively reduced.

Q 22:- An n-type semiconductor has a large number of free (conduction) electrons, yet it is electrically neutral. Explain how.
Ans:- An n-type semiconducting crystal has a large number of free electrons, yet the crystal maintains its overall electric neutrality. It is because the charge of additional electrons supplied by dopant atoms is exactly equal to the positive charge of dopant ions produced in the crystal lattice.

Q 24:- How is it that the reverse current in Zener diode starts increasing suddenly at a relatively low breakdown voltage of 5 volt or so?
Ans:- In a Zener diode, the doping is heavy for both p- and n-sides. As a result, the depletion region formed is very thin and consequently, electric field is quite high even for a reverse bias voltage of only about 5 V or so. Such an high electric field pulls valence electrons from host atoms on p-side of the junction, which are then accelerated to n-side of the junction. Due to flow of these electrons, the current in the circuit suddenly increases leading to the breakdown stage of Zener diode.

Q 25:- Why are Si and Ga As preferred materials for solar cells?
Ans:- The solar radiation spectrum is a continuous spectrum having a peak at about 1.5 eV. For photoexcitation, energy of incident photon hv > Eg. Hence, semiconductor with band gap Eg ≃ 1.5 eV or lower is likely to give better conversion efficiency. Silicon has Eg ≃ 1.1 eV and for Ga As, Eg =≃ 1.53 eV. Hence, these two materials are preferred for fabricating solar cells. Out of these two, Ga As is better than Si because its absorption coefficient for solar radiation is relatively higher.

Q 28:- What is the difference between hole current and electron current for a semiconductor?
Ans:- In a semiconductor, both free electrons as well as holes move and contribute towards electric conduction. On applying an external electric field, free electrons present in conduction band move towards the positive potential giving rise to an electron current. On the other hand, holes present in valence band move towards the negative potential giving rise to a hole current.

(a) The surfaces of two p-n junctions, howsoever smooth they may be, have imperfections greater than the lattice constant for the semiconductor material. Hence, at the joint, there will always remain some discontinuity.

(b) In a transistor, the base region should be extra thin. When two p-n junctions are joined back to back, thickness of base region will be maximum. It will lead to recombination of holes and electrons in the base region itself and collector current will be practically zero.

(b) For use as a switch, the transistor should be either in cut-off region or in saturation region of its transfer characteristics.