Science is a complex and challenging subject, as it involves so many principles and concepts that are difficult to memorize. Those student who opt for science have to face many challenges and work hard to get good marks in the exam. In this lesson, students will learn about Communication System. The best solution of the problem is to practice as many important question of 'Physics Class 12 Chapter 15' as possible to clear the doubts. 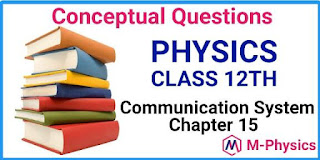 Q 6:- What is the meaning of the term "attenuation" in communication?
Ans:- By the term 'attenuation' we mean gradual loss of the strength of a transmitted signal while propagating through a transmission medium.

Q 7:- What do you mean by the term 'bandwidth' ?
Ans:- The bandwidth refers to the frequency range over which an equipment used for communication purposes operates or the portion of the frequency spectrum occupied by the message signal.

Q 11:- What is modulation?
Ans:- Modulation is the process of superposing low frequency message/information signal on a high frequency carrier wave such that the superimposed (modulated) wave continues to possess the Information contained in the original message signal.

Q 26:- What do you mean by the term 'detection'? What is detector?
Ans:- Detection (or demodulation) is the process of retrieval of information/message signal from the modulated carrier wave at the receiver stage of wireless communication. The device used for detection purpose is called a detector.

Q 27:- What is the purpose of IF stage employed in a radio receiver?
Ans:- In a radio receiver, the carrier frequency is usually changed to a lower frequency by an intermediate frequency (IF) stage preceding the detection. It is done so as to facilitate further processing of signal received from the receiving antenna.

(a) The undesired electrical signals may arise due to the random thermal motion of electrons within the system. It is referred to as the internal noise.

(b) The undesired electrical signals may arise due to nearby transmitters, electrical circuits, atmospheric disturbance, etc., leading to the external noise.

Q 32:- Why is the transmission of signals using sky waves restricted to maximum frequencies of about 30 MHz only?
Ans:- Electromagnetic waves of frequency greater than a limiting value of about 30 MHz are not reflected back on the Earth by the ionospheric layers of the Earth's atmosphere. In fact, these waves penetrate the ionosphere and are lost in space. Therefore, transmission of signals using sky waves is restricted to a maximum frequency limit of about 30 MHz.

Q 33:- Why are sky waves not used in transmission of TV signals?
Ans:- TV signals have frequencies of 40 MHz or more. Waves of frequency 40 MHz or more cannot be propagated by sky wave mode because these waves cross the ionosphere without being reflected back towards the Earth and are lost in space.

Q 34:- Why is communication using line of sight (LOS) mode limited to frequencies above 40 MHz?
Ans:- For em waves of frequencies above 40 MHz, we cannot use ground wave or sky wave propagation mode. Moreover, at such high frequencies, the size of transmitting and receiving antennas is quite small. Hence, we prefer to use line of sight (LOS) mode of communication in which the high frequency waves travel directly from tansmitting antenna to receiving antenna as the space waves. For waves of lower frequencies, we shall have to use antennas of greater size which is not practicable.

Q 41:- Why do we need amplification of modulated signal in a transmitter and again need amplification before detection at the receiver stage?
Ans:- The modulated signal is amplified by the use of a power amplifier so that the signal transmitted by the transmitter antenna is strong one. While propagating through the transmission medium, the strength of signal falls on account of attenuation. As a result, the strength of the signal reaching the antenna of receiver is extremely small. Hence, it is again amplified properly before detection.