The act of transmission and reception of information is known as communication. Every living creature in the world experiences the need to impart or receive information almost continuously from others in the surrounding world.

Elements of a Communication System

Irrespective of its nature, every communication system has three essential elements- transmitter, medium (also known as a channel), and receiver.

The purpose of the transmitter is to convert the message signal, produced by the source of information, into a form, suitable for transmission through the channel. If the output of the information source is a non-electrical signal like a voice signal, a transducer converts it to an electrical form before giving it as an input to the transmitter.

There are two basic modes of communication: point-to-point and broadcast.

To understand the principles of communication, we must know some basic terms which will be used frequently.

Bandwidth is the difference between the upper and lower frequencies in a continuous band of frequencies. It is typically measured in hertz (Hz).

The bandwidth of Transmission Medium

Broadly, transmission media have been divided into two types:

We may define a message signal as a single-valued function of time that conveys the information. Such a function has a unique value at any instant in time. The message signals have to be converted into electrical signals to make them suitable for transmission through the channel.

The electrical signals are of two types:

(i) Analog signals: An analog signal is that in which the current or voltage value varies continuously with time. In the simplest form of an analog signal, the amplitude of the signal varies sinusoidally with time, as shown in the figure. It is represented by the equation E = E0 sin(ωt+Φ) where E0 is the maximum value of voltage, called the amplitude, t is the time period and `ω=\frac{2π}{T}` is the angular frequency of the signal and Φ represents the phase angle. 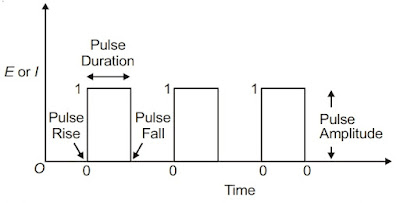 An antenna at the transmitter in communication using radio waves radiates the electromagnetic waves which travel through space and reach the receiving antenna at the other end. Several factors affect the propagation of EM waves and the path, they follow.

(i) Ground Wave: The antennas should have a size comparable to the wavelength λ of the signal (at least ~ λ/4) to radiate signals with high efficiency. At longer wavelengths (i.e., at lower frequencies), the antennas have a large physical size and they are located on or very near to the ground. In standard AM broadcast, ground-based vertical towers are generally used as transmitting antennas. For such antennas, the ground has a strong influence on the propagation of the signal. The mode of propagation is called surface wave propagation and the wave glides over the surface of the earth.

A wave induces a current in the ground over which it passes and it is attenuated as a result of the absorption of energy by the earth. The attenuation of surface waves increases very rapidly with an increase in frequency. The maximum range of coverage depends on the transmitted power and frequency (less than a few MHz). more

(ii) Sky waves: Long-distance communication can be achieved by the ionospheric reflection of radio waves back towards the earth. Sky wave propagation is used by short wave broadcast services. The ionosphere is so called because of the presence of a large number of ions or charged particles. It extends from a height of ~ 65 km to about 400 km above the earth’s surface. Ionization occurs due to the absorption of the ultraviolet and other high-energy radiation coming from the sun by air molecules. The degree of ionization varies with the height. The density of the atmosphere decreases with height. At great heights, the solar radiation is intense but there are few molecules to be ionized. Close to the earth, even though the molecular concentration is very high, the radiation intensity is low so that the ionization is again low. 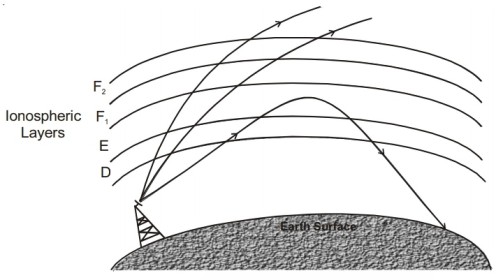 However, at some intermediate heights, there occurs a peak of ionisation density. The ionospheric layer acts as a reflector for a certain range of frequencies (3 to 30 MHz). Electromagnetic waves of frequencies higher than 30 MHz penetrate the ionosphere and escape. These phenomena are shown in the figure. The phenomenon of bending em waves so that they are diverted towards the earth is similar to total internal reflection in optics. more

Because of the line-of-sight nature of propagation, direct waves get blocked at some point by the curvature of the earth as illustrated in Figure. If the signal is to be received beyond the horizon then the receiving antenna must be high enough to intercept the line-of-sight waves. more

Modulation and Its Necessity

Modulation is the phenomenon of superimposing the low audio frequency baseband message or information signals (called the modulating signals) on a high-frequency wave (called, the carrier wave). The resultant wave is called the modulated wave, which is transmitted. more 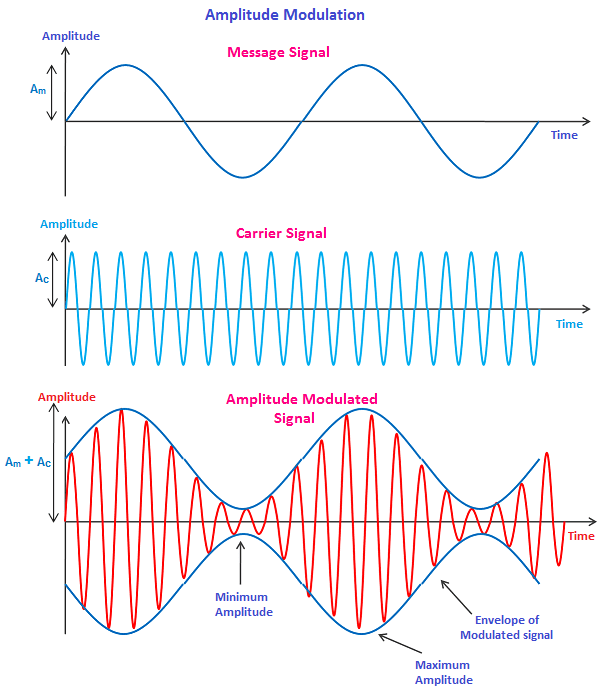 Let the sinusoidal wave be represented as

we represent amplitude modulated wave as

Am = amplitude of modulating signal

The first use of the word "Computer" was recorded in 1613. It referred to a person who carried out calculations, often as employment. From the end of the 19th century, the word began to take on its more familiar meaning, a machine that carries out computations. It is a general-purpose device that can be programmed to carry out a set of arithmetic or logical operations automatically. Embedded computers found in many devices from MP3 players to fighter aircraft and from toys to industrial robots are the most numerous.

This was not enough and before the end of the twentieth century, we succeeded in creating a global network of computers that provides ways to exchange information and communicate among all computers connected to the network. "Internet"- a global system of interconnected computer networks that links several billion devices worldwide.