Science is a complex and challenging subject, as it involves so many principles and concepts that are difficult to memorize. Those student who opt for science have to face many challenges and work hard to get good marks in the exam. In this lesson, students will learn about chapter 14 Oscillations. The best solution of the problem is to practice as many important question of 'Physics Class 11 Chapter 14' as possible to clear the doubts. 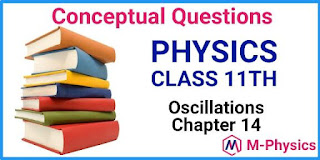 (a) The force (or acceleration) is proportional to its displacement.

(b) The force (or acceleration) is directed towards the mean position of SHM.

If amplitude of oscillation is large, then sinθ ≠ θ and condition for SHM is not fulfilled. Therefore, now motion of pendulum is though oscillatory but not simple harmonic.

(a) minimum at the extreme positions during the oscillations, and

(b) maximum at the mean position.

The net displacement of a particle executing SHM is zero in one complete cycle.

Q. 29. What would happen to the motion of an oscillating particle if the sign of the force term in force law F = -ky is changed?
Ans. When the sign of force F is changed, the expression for force becomes F = ky. Now, this equation does not represent a harmonic oscillation. It is because now with increase in value of displacement y, value of force F and hence acceleration a goes on increasing. Thus, the motion will become a linearly accelerated motion along a given direction.