The mathematical formulation of quantum mechanics is based on linear operators as may be seen from the postulate given below, often named as the... 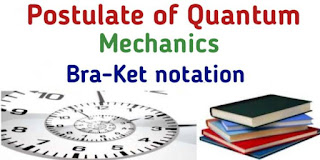 The first postulate states that "there is a state vector (or wave-function) associated with every physical state of the system which contains the entire description".

Thus according to first postulate the information about the properties of a system is contained in the function of all coordinates and time that is called the wave function. This information may be definite or it may be in statistical form.

For every physically observable there exist a linear Hermitian operator. The operators associated with various dynamical variables like energy, momentum, may be obtained as follows :

As Hamiltonian 'H' represents energy, the above equation in the form of eigen value equation may be expressed as

The fourth postulate gives the rules for extracting information from the wave function. The expectation value of a variable of a system in the state Ψ is given by

The expectation value represent the arithmetic mean over a large number of a simultaneous experiments in identical states Ψ. In general, wave mechanics admits a fluctuation in these measurements, while in classical mechanics it is assumed that every variable is absolutely determine in principle.

The Eigen function of the operators corresponding to observable forms a complete set.

In quantum mechanics, Bra-Ket notation is a standard notation for describing quantum states. The notation use angle brackets '<' and '>' and a vertical bar '|' symbol to denote the scalar product of vectors or the action of a linear function on a vector in a complex vector space. The scalar product is written as

A bra and ket with the same label are hermitian conjugate of each other and is also known as the Dirac notation.