A wave function in a quantum physics is a mathematical description of the quantum state of isolated quantum system. Physical importance

A wave function in a quantum physics is a mathematical description of the quantum state of isolated quantum system. The wave function is a complex valued probability amplitude and the probability for the possible results of measurements made on the system can be derived from it. The most common symbols for wave function are the Greek letter 'Ψ'. It is represented by- 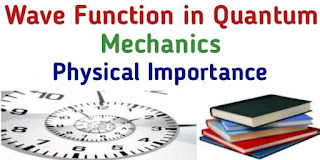 It must be satisfied following systems-

(i) Ψ(r, t) are physically acceptable.

(iii) Square of its norm has meaning. According to born probability interpretation square of the norm represent a position probability density.

Physical importance of the Wave Function

The wave function Ψ is sometimes called probability amplitude for the position of the particle. The postulate suggested by Born show that the quantum mechanical laws and the results of their measurements can be interpreted on the basis of probability considerations.