The classical mechanics explain correctly the motion of classical bodies like planets, stars and macroscopic as well as microscopic terrestrial bodies

In spite of this classical mechanics could not explain a large number of observed phenomenon like photoelectric effect, Compton effect, Raman effect etc. The inadequacy of Classical Mechanics or Newtonian mechanics led to the development of Quantum Mechanics. 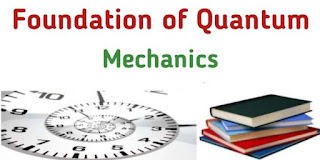 Planck was able to explain law of distribution of energy in the spectrum of black body. This theory was given by Planck in his historic paper titled "Theory of Law of distribution of energy in a normal Spectrum" presented, before the Berlin Academy of Science on December 14, 1900. This day, in fact may be considered at the birthday of Quantum Mechanics.

The above difficulties have been resolved by development of new methods of approach, the Wave Mechanics and mathematical forms of the same theory Matrix Mechanics. This will be discussed in due course.